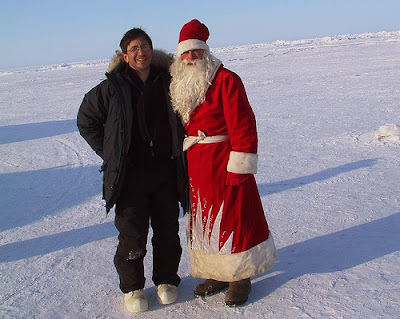 Here's something I wrote 6 years ago, for a now-defunct blog. Of course, it rankled the p.c. folks no end. I'd like to hope they've grown up since then, but somehow I doubt it:

In addition to Papa Bear O'Reilly's inane "War on Christmas," there are other seasonal idiocies afoot. One is the taking-offense by certain wet blankets when someone wishes them a Merry Christmas. So if I may:
As an atheist, I decorate my house to the hilt, with a tree, lights, ornaments, wreaths, and live greens; I send Christmas cards that are unparalleled -- handmade "Hon" cards by Glen Hibline of Baltimore -- that are treasured by friends all over the country; I make an annual pilgrimage to a kitschy neighborhood called Hampden to see the over-the-top decorations on 34th Street, which cause traffic jams for blocks around; I revel in the brightly lit Washington Monument (built years before the national one), the street decorations, the window displays, and the smell of pine; I immerse myself in both traditional Christmas carols as well as classical Christmas music, some of the finest music ever composed in the history of Western art; I never miss "A Charlie Brown Christmas" on TV; I look forward to the re-telling of Dickens' "A Christmas Carol" on the radio; I listen to Dylan Thomas himself reading his "A Child's Christmas in Wales"  on CD; and I say "Merry Christmas" to all and sundry.
I don't give a flying fuck (pardon my French) about people's hothouse-flower p.c. sensibilities. Get over yourselves! Get a grip! This is a MILLENIA-OLD, NON-DENOMINATIONAL tradition celebrating the Winter Solstice! Who cares if Christians attached themselves to it by claiming the birth of Christ?? Who cares if Jews attached themselves to it through Hanukkah?? Who cares if Africans (enormous population -- which Africans? which countries? North Africa or sub-Saharan Africa? -- completely different cultures -- does anybody know? spurious scholar and convicted felon Ron Karenga simply invented it in 1966) attached themselves to it through Kwanzaa?? Who cares, who cares, who cares?!
Can't you people just enjoy the beauty of what you're looking at? Can't you enjoy anything??
Saying "Merry Christmas" is not an insult to anybody's anything. Saying "Happy Holidays" is not an insult to anybody's anything. Y'all say what you damn well please. Just quit turning everything in the world into some goddamn statement of political correctness.
Political correctness is the censorship of the Left. It's that simple. It's like living in the Soviet Union, where all art had to "uplifting," "life-affirming," "approved."  Only now it's not Stalin who's imposing these rules on us, it's so-called enlightened liberals. They're not enlightened. And they're giving the rest of us a bad name.
I'm sick and tired of these fools hijacking honest liberal principles and turning them into knee-jerk jargon, "approved" language, and sanctimonious statements.
To hell with political correctness, at this and all times of year. In sum:
MERRY CHRISTMAS!
Posted by Lisa Simeone at 1:57 PM

Email ThisBlogThis!Share to TwitterShare to FacebookShare to Pinterest
Labels: Christmas, political correctness, religion
Newer Post Older Post Home
"The man who asks of freedom anything other than itself is born to be a slave." -Alexis de Tocqueville