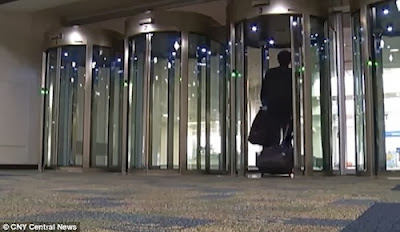 A few weeks ago I caught wind of another nifty whiz-bang airport innovation guaranteed to make your journey even more onerous than it already is. And of course, it’s brought to you by our trusty friends at the TSA.


At Syracuse International Airport, you can’t leave — after you’ve gotten off the plane, collected your baggage, and are ready to hit the road — unless you pass through electronically controlled, wholly contained, glass portals. If you’ve ever been to a European bank, you know what these are. They hold only one person at a time. You step in, a cylindrical glass door locks around you, then when someone in the bank decides you’re not a bank robber, they release the lock and allow you to proceed. Same for the next person. Thus, only one person at a time can enter, not a slew of people all at once.
Okay, I get it with banks. Makes sense. But when a traveler is leaving the airport?? When you’re just trying to go on your way?
This brilliant idea came to Syracuse with a $60 million price tag, part of an airport renovation.

‘We need to be vigilant and maintain high security protocol at all times. These portals were designed and approved by TSA which is important,’ said Syracuse Airport Commissioner Christina Callahan.

Ah, yes, because you never know when someone is leaving the “sterile area” loaded with explosives and, not satisfied with detonating a plane in mid-flight, wants to blow up the parking garage instead.
Apparently these things were installed so that the TSA wouldn’t have to staff the exits. And, of course, because somebody — the manufacturer — is making big bucks off them. As always with so-called homeland so-called security, follow the money.
But the first thing I thought of was, what if you get trapped inside? What if your bag doesn’t fit and you get stuck? (Watch the video.) What if there’s an emergency at the airport and you have to get out quickly? You can’t, because these things let so few people at a time through. They’re not like subway turnstiles, which are mechanical, and which, of course, you could always jump over. These are electronic. Which means they can be prone to failure. What if there are a lot of planes landing at once and a crowd forms at the portals? Then you have to wait in line to get out.
Well, why not? You have to wait in line to get bullied and groped by the TSA when you’re entering the airport, why shouldn’t you also be inconvenienced when you leave? Gives the whole experience a nice symmetry.
Never fear, gentle reader, Syracuse doesn’t get all the fun; these pods are coming soon to an airport near you.
Gee, I feel safer already!
(Photo courtesy of CNY Central News)
Posted by Lisa Simeone at 8:46 AM

Email ThisBlogThis!Share to TwitterShare to FacebookShare to Pinterest
Labels: airport, DHS, security, stupidity, travel, TSA, waste
Newer Post Older Post Home
"The man who asks of freedom anything other than itself is born to be a slave." -Alexis de Tocqueville