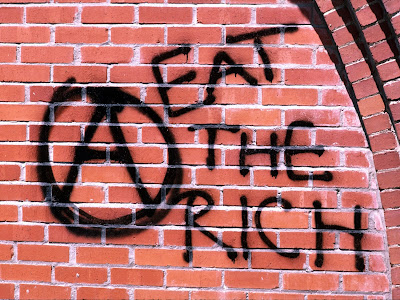 As people assess their charitable giving in 2013, choosing which causes are most dear to them and also looking for a few tax breaks (as well they should, especially given that so much of our money goes to war and destruction), some recent research is sobering:


As Truthdig reported before, a UC Berkeley study published earlier in 2013 showed links between wealth and selfish, anti-social behavior. The damning results are worth repeating. Compared with their poorer counterparts, wealthier participants consistently took more candy from children, cheated at games for petty cash prizes, lied during negotiations, stole at work, and endorsed unethical behavior.

Lead researcher Paul Piff said the findings across 30 studies on thousands of people across the U.S. didn’t apply just to people who were wealthy in real life. Those who were made to feel wealthy in laboratory games began to behave in accord with the findings too.

. . . in those scenarios, the “rich” subjects routinely showed a lack of insight into the conditions that enabled their success. “You, like a real rich person, start to attribute success to your own individual skills and talents,” Piff continued. “And you become less attuned to all of the other things that contributed to you being in the position you’re in.”

Furthermore, the results did not break down along political battle lines. “Our findings apply to both liberals and conservatives. It doesn’t matter who you are. If you’re wealthy, you’re more likely to show these patterns of results.”

Email ThisBlogThis!Share to TwitterShare to FacebookShare to Pinterest
Labels: berkeley, economy, narcissism, philanthropy, poverty, psychology, Rousseau, selfishness, wealth
Newer Post Older Post Home
"The man who asks of freedom anything other than itself is born to be a slave." -Alexis de Tocqueville